As a homicide detective, I understand the power of alibis. When a potential suspect can prove he or she wasn’t available to commit a crime because they were occupied elsewhere, they are eliminated as a candidate for the murder. Alibis create conundrums: conditions difficult to explain based on the impossibility of simultaneous appearances. In a similar way, the relationships between DNA, proteins, enzymes, and the cell’s membrane present a biological conundrum. Those who believe life can originate in our universe without supernatural interaction (and guidance) must overcome this conundrum if they hope to account for the presence of life “inside the room” of the natural universe by staying “inside the room” for an explanation. In my new book, God’s Crime Scene: A Cold-Case Detective Examines the Evidence For A Divinely Created Universe, I describe the depth of the dilemma by illustrating the process of protein formation within the cell.

Specially formed functional proteins “unzip” a specific portion of the DNA by separating the helix at the middle of its rungs. Additional specialized proteins then act as molecular machines, helping to assemble nucleotide bases along one of the unzipped DNA segments.

This new assemblage of nucleotides is called a messenger RNA (mRNA). Once formed, the shorter mRNA molecule detaches from the DNA and is carried off into the cell by additional protein “helpers.” The mRNA is carrying instructions needed to build a protein. It is helped by another RNA molecule known as transfer RNA (tRNA). The mRNA and tRNA meet in a molecular machine called a ribosome. This important mini-factory is constructed from proteins and RNA complexes. Here, the tRNA transfers the message carried in the mRNA so amino acids can form each protein: 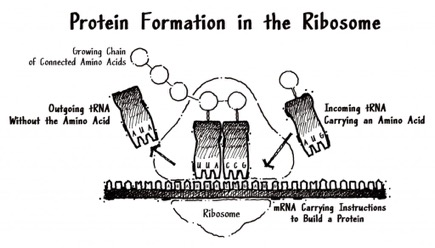 Once the sequence of amino acids has been established, something amazing happens. Rather than remain in a long chain, the amino acids begin to roll up and fold onto one another, forming the specific finished shape of the protein required to accomplish its job. This may take a few seconds and scientists are still mystified as to how amino acids accomplish this task.

None of this can happen without the aid of enzymes and the protection of the cell membrane. Enzymes are large molecules constructed primarily with proteins. These important molecules activate and accelerate the reactions related to everything from food digestion to DNA formation. Nearly every chemical response in the cell requires an enzyme to help it happen fast enough for life to result. Finally, all of this activity must be protected. That’s where the cell membrane becomes critical. The membrane separates the interior of the cell from hostile exterior forces. It is constructed with fatty molecules (lipids) and proteins (along with carbohydrates). Some cells also have an additional cell wall surrounding the membrane. Cell walls are tough but flexible, and offer an additional layer of filtering and protection.

Now that we’ve reviewed the inner activities of the cell, you’ve probably already recognized the “chicken and egg” problem. Enzymes are necessary for the timely formation of proteins, but these enzymes are built, in part, with proteins. Worse yet, this “chicken and egg” problem is also present in the larger relationships between the DNA, RNA, proteins, ribosomes and cell membrane. 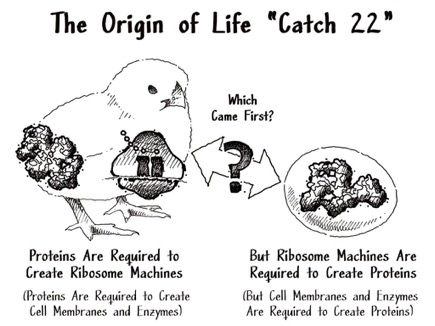 Paul Davies describes the conundrum: “Take DNA… It has a grand agenda, but to implement this, DNA must enlist the help of proteins… proteins are made by complicated machines called ribosomes, according to coded instruction received from DNA via mRNA. The problem is, how could proteins get made without the DNA code for them, the mRNA to transcribe the instructions, and the ribosomes to assemble them? But if the proteins are not already there, how can DNA, ribosomes and all the rest of the paraphernalia get made in the first place? It’s Catch-22.”

All these important machines, transportation vehicles and tools must arrive at the cellular factory simultaneously and function in unison if life is to be possible. The cell membrane and enzymes cannot be constructed without proteins, but the protein formation must be accelerated by enzymes and protected by the membrane. Proteins can’t be formed without DNA information and RNA activity, but machines formed from proteins (like ribosomes), are a critically necessary part of this process.

In this brief blog post (excerpted from God’s Crime Scene), I’ve only described two of the many “chicken and egg” problems naturalists must consider and explain as they account for the origin of life in the universe. Biological systems are replete with irreducibly complex conundrums such as these, and the best explanation for this kind of complexity is intelligent interaction. A supernatural designer can overcome the “chicken and egg” conundrums we’ve described, and a Divine Designer of this nature remains the best inference from the evidence. For a much more thorough description of this evidence, please refer to God’s Crime Scene, Chapter Three – The Origin of Life: Does the Text Require an Author?